You can also connect with us on Twitter! : @9kumiParade

Have you got a question about the band that you just haven't been able to get answered?
Are you on the lookout for translations?
Do you need a place to rant about how awesome that latest release was?

You've come to the right place! Whether you call them アリス九號., ALICE NINE., or A9, we're here for you! To see some of the posts here, you must have a Livejournal account and then join the community. We love meeting new 9kumi (cue-koo-mee = ALICE NINE. fans) so don't hesitate to introduce yourself once you become a member and you can even take a few minutes to read others' introductions. If you'd rather not create an account to join the community, you can still comment anonymously on most entries... but it's more fun if you join us!

Please read the rules on the [ profile page ] before you do any posting or commenting. Thanks!

You can get many of ALICE NINE.'s releases on itunes, Apple Music, or Spotify (here/here/here). If you are unable to buy the physical releases, please support them through listening to legal streaming/digital options!

Introductory Post : Check back now and again to see the introductions of new members!

How to Join the Fan Club (external link)

This is a "sticky post", so it will always be the top entry on this community. If you have any questions about how to join, some suggestions for the community, see some rule-breaking, or a problem on the community, please leave a comment to this entry. All comments are screened, which means only I, a friendly moderator, will be able to see them. You can also send me a direct message.

I've got a few more announcements to make, while I'm at it!

In an interview from September 2019 (?), the members confirmed that the correct English spelling for the band name is now:

All capital letters, space, and of course a period at the end.
At some point, I'll probably get around to making that update on our profile page and stuff, but just keep that in mind! The English tag on Twitter is still "AliceNine" (with the Japanese tag being "アリス九號"), however.

The DVD / Bluray of their 15th Anniversary tour finale in August 2019 is now out on sale. The title of it is as follows, along with its beautiful cover art, and you can buy it in all the usual places online (or in-store if you are in Japan): 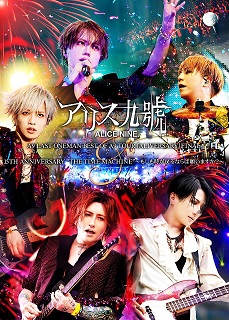 A9 LAST ONEMAN BEST OF A9 TOUR 'ALIVERSARY' FINAL & 15TH ANNIVERSARY "THE TIME MACHINE" ~If you could turn back time, would you wish to?~

The DVD is one disk, of the live itself.
The Bluray is two disks; one of the live itself with a full-length, 5-member audio commentary track, and the second disk is an audio CD of a selection of 16 songs from the live.

Feel free to leave a comment or a question for how to get a hold of it if you're not sure!

In addition, three new lives have been announced -- they have said they are scaling back on live performances and touring a little less this year compared to last year in order to make more time for creative pursuits. They're currently working on their next release, a mini album, which they plan to give more information about during their next live in February!

FEBRUARY
15th : Valentine's Day live! 「愛ノ詩ト宴-LOVESONGS-」 ("Ai no Uta to Utage-LOVESONGS-")
They have said that the majority of the set list will be cover songs!

MARCH
7th : THE ALTERNATIVE 3rd season (Saga and Nao's side project)
From what I understand, THE ALTERNATIVE generally play covers rearranged with a focus on drum/bass, and they also both play acoustic guitar and sing cover songs together. As a duo, they seem to have a bit of a folk feel, sort of like hosting a kitchen party. Pay them in smiles!

14th : THE HIROTO (Hiroto's solo project)
Hiroto's solo project seems to be "anything goes". Hiroto of course is a guitarist at heart, but takes influence from all sorts of sources, and collaborates with many different types of artists, so you can expect him to play guitar, to sing, and then anything else... will be a surprise!


In addition, ALICE NINE. are currently collaborating with a crane game application... a long-distance crane game! If you sign up with the application, you can play the crane game from a distance and potentially win a prize (an ALICE NINE. tapestry... pictured in the tweet below). I have tried it, but I'm terrible at crane games, so no luck for me so far lol! It is available to play until the 18th, and after that time, anyone who won one of the tapestry prizes will also have the opportunity to win additional photos of the members, some of which would be signed. Good luck!

If you're going to be in Japan during any of these dates, but are not sure how to get tickets, please feel free to leave me your question(s) as a comment, and I'll be happy to help out.

I, myself, will be going to see THE ALTERNATIVE on the 7th of March (provided I get a ticket in the first round of applications!), so if you are planning on going as well, let me know, we can chat a little before the live!

I have some exciting news to share if you are going to be in or near the Los Angeles area on the 15th of January 2020 (this Wednesday), at 7:00pm! As per the following Tweet, Hiroto is hosting a Guitar Demo and social event. If you RSVP, the event is free, but you can also purchase VIP tickets that include a photo and autograph.

VIP tickets will also be available for $100 and include:
-A photo with HIROTO on your device or a Polaroid
-Autographed HIROTO poster and one additional autograph on an item of your choice

Entry is free for this event with advance RSVP via Eventbrite. At-door registration is $10 pending space availability.
Please note that only VIPs will be eligible for autographs/photos with HIROTO.

Tickets can be reserved/purchased on [ THIS PAGE ].

There will be another LINE live on November 28th, 7pm (Japan time).
You can watch it here.

The new live DVD and Blu-ray is available for preorder now!

In case you haven't seen them, there are some new social media accounts!

Also, check out the band's Note account if you haven't! The contents are really interesting.
Link. (1500yen per month)

Now you can listen to the new single on Spotify, Apple Music, Google Play Music, among others.
The complete list is here. 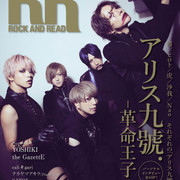 Alicenine. will be on the cover and 55 pages of ROCK AND READ #86, to be released on October 30th.
It can be preordered at HMV and Amazon Japan.

Although they haven't been published in the OHP yet, CD Japan and Tower Records have these covers for the new single:

And speaking of "covers", Saga uploaded a clip of his own version of the song to Twitter:

As they announced in the last LINE Live, "A9 PREMIUM VIP SALON" will sadly end this month. But it will be replaced with "アリス九號. Official note"!